My column in Afternoon Dispatch and Courier 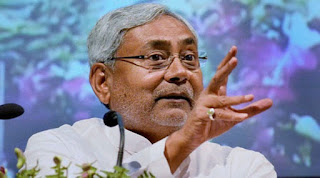 Is Nitish Kumar distancing himself from BJP-led NDA before 2019

Telegu Desam Party (TDP) chief who heads Andhra Pradesh government ever since the state was formed, Chandrababu Naidu, one of the maverick politicians on the horizon has completely distanced himself from the Bharatiya Janata Party (BJP)-led National Democratic Alliance (NDA).

Another maverick politician on the horizon who is known to adjust his moves according to changing political climate is Bihar chief minister Nitish Kumar. Now the question being discussed in corridors of power is whether he is also distancing away from the BJP-led NDA in Delhi. This is not for the first time that such a talk is being held about Nitish Kumar.

He was brain behind Mahagathbandhan, he patched up with one-time-sworn enemy Lalu Prasad Yadav to trounce BJP in year 2015. He realised climate is changing so there was talk of Nitish changing sides and in 2017, he returned back to NDA, leaving the Mahagathbandhan. That is past, now political climate is changing or perceived changing that regional satraps are alert all the time and adjusting themselves to their regional friends and enemies on the basis of changing climate in Delhi. Ultimately one can remain oblivious to what is happening in Delhi and adjust so as toremain floating in the quicksand of power politics. It is easier said than done and one appreciates the remarkable ability of these mavericks to change accordingly without thinking too much about moral values and the question, “What will people think?”.

The truth about vote banks
In murky power politics one has to take a decision and later give logic to defend your move. The vote banks follow you and your logic or rather that is why these group of supporters are described as vote banks.

The developments in Uttar Pradesh where two sworn enemies, Mayavati of BSP and Akhilesh Yadav of SP have joined hands together giving touch time to the BJP, the media had started taking less note of Nitish Kumar for quite some time. However, Nitish is remaining uncertain about the NDA once again, the questions being asked about possibilities of Nitish Kumar returning back to Mahagathbandhan began making rounds. The question is whether he will really desert the NDA in favour of the Mahagathbandhan and give a last push to the opposition unity needs for year 2019 or remain steadfast in the NDA and take on Mahagathbandhan.

The BJP as well as the Congress and RJD are on watch along with other regional satraps like Mamata Banerjee, Sharad Pawar, Mayavati, as Nitish is not going to come back to the opposition front without having his own agenda. But the question is will he be welcomed with open arms by the rivals within the opposition front.

It has not happened suddenly that people are talking about such possibility of U turn by Nitish Kumar. The JD(U) leaders and workers have been crying over the Big brother attitude adopted by local BJP leaders in the state. All the talk of returning back to the Mahagathbandhan may be a ruse by the JD(U) to put pressure on the BJP and seek more seats for the year 2019 and increase its bargaining power in post 2019 general elections. There is already demand from local JD(U) leaders to get minimum 25 Lok Sabha seats out of 40 from Bihar to continue their alliance with the NDA. The party claims that the climate in the state has changed in recent times and they have to have upper hand in deciding fate of seats in Bihar. They do not bother to remember that they had won only two seats in the 2014 elections. The party demands allocation of seats right now even though elections are in year 2019, so that the party can decide on who should contest which seat and accordingly prepare campaign programme. The JD(U) is using 2015 performance as the base for allocation of Lok Sabha tickets and not the year 2014 making it difficult for the BJP to decide.

Even though it is going to be general election for the Lok Sabha the Prime Minister Narendra Modi is going to be star campaigner not only for the BJP candidates but also for candidates from NDA alliance parties. The idea is to take advantage of Modi’s national image. In Bihar, the JD(U) wants Nitish Kumar to be on front along with Narendra Modi during the campaign to win over voters. While talking all these issues, the whispering campaign about possibility of Nitish Kumar switching sides is making regular rounds putting the BJP on tenterhooks.

The BJP knows that it is not merely kite flying about Nitish as he himself is sending some indications of rethink or may be using these signs to put pressure on the BJP for better deal in general elections. It may be a mere courtesy call by Nitish Kumar to his sworn enemy Lalu Prasad Yadav who was in hospital but it started the discussion. The Congress is not openly saying anything about such possibility as it does not have much stake in the state as well as it does not want to vitiate the atmosphere among all the parties trying for a grand alliance against the BJP for 2019. However, that has not stopped it from having a line open with the party in power in Bihar to find out whether Nitish is any way interested in anti-BJP front since the NDA government has failed on so many fronts and the Modi charisma may not be so effective.

However, Nitish also knows that it is not going to be so simple to just switch off from the NDA and open a new line with the Mahagathbandhan as his enemies would not like him to join it. As expected, Tejashwi Yadav has already ruled out any possibility of the Mahagathbandhan welcoming Nitish Kumar with open arms since he himself is gaining support and showing his ability to win over voters. He can display his political acumen by showing Araria and Jokihat victories to claim real leader in Bihar politics.

Nitish not in a hurry at all
Nitish seems to be not in hurry at all. He would rather wait and see what BJP’s response is and also see what is happening to the Mahagathbandhan as the elections to the Lok Sabha approaches nearer. He knows very well that the Congress as well as other major anti-BJP parties will like him to join their ranks and if they decide then there is no chance the RJD leaders Lalu and Tejashwi will oppose his moves. They would need some face saver to pardon Nitish for his joining the NDA in first place. It would not have any impact on the voters’ behaviour but it will certainly have a dent in the image of Nitish Kumar.

In days of alliance politics, the regional satraps have fine-tuned their own strategies to gain from the uncertainties of shifting alliances of voters fractured mandates. As seen in Karnataka, those who fought against each other have come together to form the alliance government. In Maharashtra way back in 1999, the Congress and the Pawar-led NCP had come together to form the government in the state to keep the saffron front of BJP and Shiv Sena away from the power.

It is not easy and fast for Nitish Kumar to take steps towards Mahagathbandhan before considering many factors as any wrong step at this juncture will be disastrous for his kind of politics.
Posted by Prakash Bal Joshi at 10:42 PM No comments:

Posted by Prakash Bal Joshi at 10:36 PM No comments: