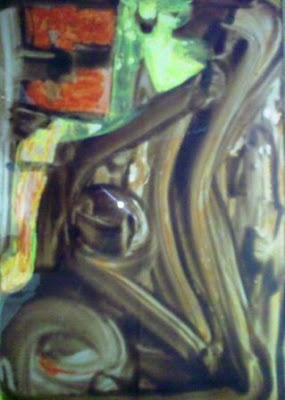 Tribute to Tyeb Mehta—Master of masters’

Tyeb Mehta has a special place in the realm of Indian art –some one who worked in isolation, dedication without giving any heed to suggestions or criticism in media and close circles and evolved his own world of enigmatic images. A language which was rooted in ancient Indian culture and at the same modern enough for the Western world to grasp his most talented work. He emerged as a Master of masters’ who showed a way for hundreds of artists not only to follow his footsteps but showed a way to interpret rich heritage in most modern way.
He was one of the silent members of the Bombay Progressive Artists Group which wanted to experiment and break away from mere exotic and studio kind of work and relate and express to the environment surrounding them. He was preoccupied with formalist manner of expressions. His anguish as a troubled soul was very vividly depicted in his work. His stay in Europe, a self imposed isolation, helped him formalize his symbolic manner without any hindrance. He was influenced by European masters but his thinking and creative process remained grooved in psyche of Indian subcontinent. He will be remembered for his early images of trussed bulls, to the rickshaw puller, his depictions of Kali and other mythological symbols and his series of diagonal traces as these images are imprinted on vast canvas of visual memory of Indian art. Perturbed by individual and group violence, he treated it at a different level and spread the essence of peace through is numerous works.
Despite being a man of few words and an introvert, he turned out to be one of the top five Indian artists fetching fascinating value for his work. He was one of the most expensive Indian artists who helped to generate boom for Indian art. He refused to compromise, declined to take note of what was acceptable and continued his search unmindful of market valuation. No wonder he will remain most enigmatic Indian master for many more generations of artists. .
==
Ends
Posted by Prakash Bal Joshi at 12:26 AM No comments: